Each year, the regions of the UK put forward teams of Under 17s, for each weapon, to fence for the Cadet Winton Cup. This has been a long tradition in honour of Nicholas Winton. The event will usually take place in December.

The West Midlands Region Committee shall select teams of 4, for each weapon, to represent the region at this 2 day event.

The current selection method is as follows:

Fencers will be ordered using the following diagram: 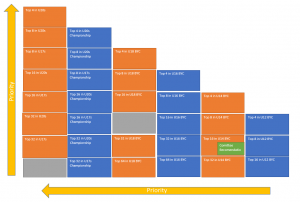 Fencers shall be under 17 at 00:00 on January of the year of the competition.

Any athlete currently living, studying, or training within the region is eligible for selection. As well as any athlete that has lived or fenced in the region for more than 3 years, that has since relocated.

The Cadet Winton is a two day regional team event run every year in December for foil, epee and sabre. There are four fencers in each team for each weapon and each gender, so six teams in total.  There are four members in each team in the event of injury or to rest a fencer, as only three fencers fence in each round. Normally, fencers will stay overnight on site in the schools dorms.

Format
As usual the event is a 6 weapon ‘team-event’ where the overall scores of ALL the weapon teams are combined to reach the grand total. All matches are fenced as a best of 9 fights (not-relay). The target being 28 fights (or more) to win an ‘overall’ match against another Region.